When war gets a familiar face & touches our deepest emotions 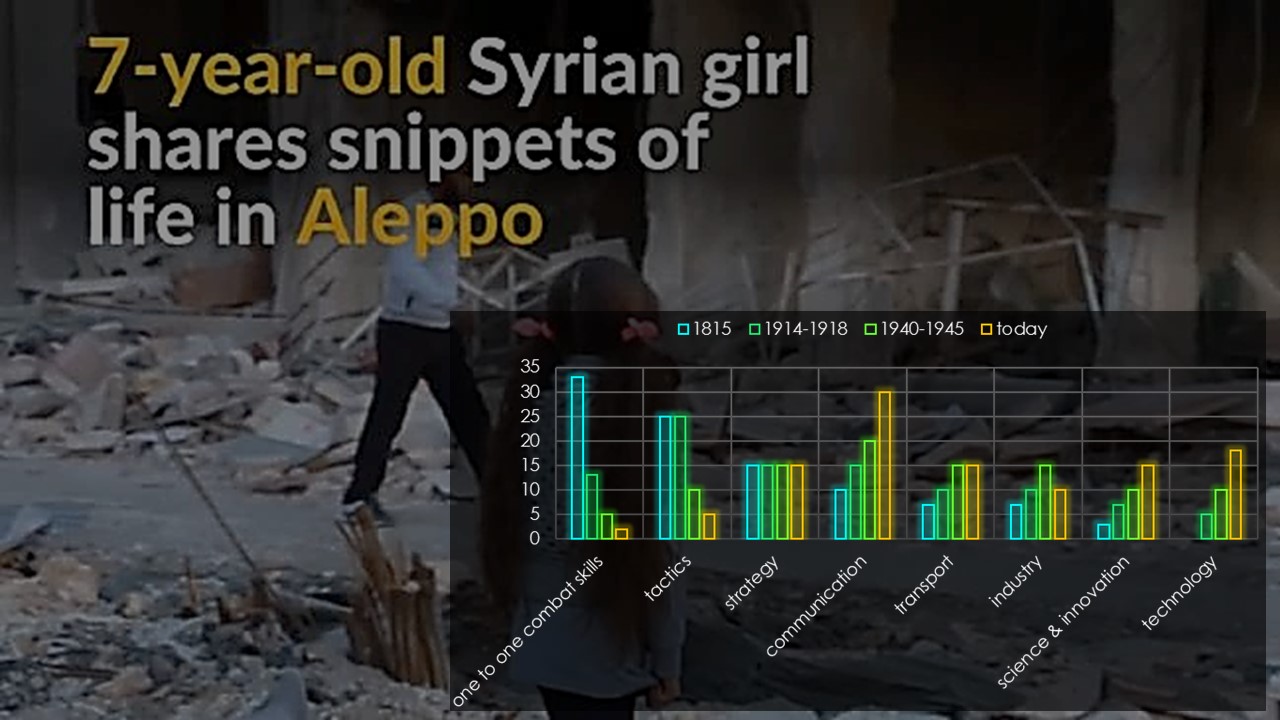 One cannot watch these messages, tweets, photographs and video’s without seeing that these people look very alike us, and imagine they were, not so long ago, living similar lives, whatever religion they adhere to.

That makes it difficult…

Far from being an expert in this area, I observe the art of war has evolved quiet a lot… 200 years ago, war was fought between two adverse parties, in a well determined area, face to face. Sometimes an allie came in.

Surely the environment sometimes, often maybe, suffered from local hostilities when an army passed through… but war was a locally presented, exported, artisanal product.

Since, war has been industrialised. Its industrialisation has often been an inspiration for evolution at the civil side afterwards.

First world war started differently, and certainly ended up having given wars a new look, a new dimension. Where before, as a soldier and as an officer, good fighting skills might have signified a little difference, world war I turned the basic soldier into an indispensable sacrificial mass. Civils living nearby strategic targets were transformed in collateral damage. Industry took a very active role in success or failure on the battlefield. It made war strategy and technology, more efficient, more cruel and vaster. Spreading the frontlines became easier. Spreading the “war phenomena” in itself was on its way.

But still, the only emotion war could generate for people living very far away from the front, might have been the potential loss of a close one, some images generating curiosity and maybe anger, fear. For countries sending troops to the front we need to add fear of loss of men, and collateral societal change through the roles endorsed by women. But that was mostly it. Communication became an opportunity, but was still evolving through very tiny steps.

Second world war came in and addressed an even larger part to industry. Arms, cars, tanks, public transport, airplanes, … and tragically the strategic engineering facilitating the holocaust. Communication took a bigger share too: radio, telephone, telegrams, films, … Travelling got quicker, people became more accessible. Front tended to split itself into different pieces, allies were more easy to convince, on both sides. It gave the opportunity to spread the conflict. But still the spreading took some time to travel around the globe.

Third world war, gets another face… It started … when did it start exactly? In 2001, with 9/11? With a systemic crisis in the occident in 2007? With the Arab Spring in 2010? In 2014, along with the brutality of the IS regime? When external interventions entered the scene?

It’s not clear to anyone. Neither is the territory it’s taking place in. Nor the enemy we’re fighting…

No. Because the enemy?

We were all able to identify IS adherents in the conflict area, they identified themselves clearly through their physical image thrown into the world, their violence, and the signature of their war crimes.

But you’ll agree with me, that once they leave their “uniform” behind and spread amongst people here, you’re not able to distinguish them anymore.

Driven into a less promising position, they tend to throw off their uniform in the conflict areas too, mingling amongst the locals.

And then, who are the locals?

Who’s good? Who’s bad? Who’s worth fighting for, who isn’t?

Is not that simple, it has never been.

But what’s certainly very different this time, is the way information travels, the speed, the media, the picture, the voices… interpelling people, men, women, children…

What’s real? What’s not? What has been counterfeited?

Caring about the other is a profound instinctive attitude. Trying to help is not even basically human, it even charms us when we see animals, cross species, coming to aid to a helpless other one.

That’s the main change in this war. “Real Time Emotion.” Good or bad…

The only way to get around its invasive impact is by zapping the information.

And people do. They rather have the demolishing politically instrumented messages than the real photos and videos sent out by local people, living tragedies, trapped on their spot, just having their hope and their courage to hold on to, sending out messages they would like to bring the ultimate solution. And they won’t.

Because I believe one cannot take more than he can bare, nor here, nor there.

Because I believe one doesn’t voluntarily live in the middle of a virtual war, suffering and feeling the powerless despair of waiting for a solution he cannot initiate.

It’s tremendously sad, but that’s where communication technology passes beyond its positive effects… That’s where the engine stops helping things forward. That’s where people here tend to save the little energy left for the engine, to start it up again when things get better, leaving the last bit for the moment where it can mean a real difference.

Just like the destructive violent IS propaganda killed its efficacity by its high frequency and too heavy cruelty at a certain point, the high frequency of too emotional videos relating day-to-day misery will kill the supporting public opinion.

The world is made out of people, and people are able to take misery from the other for as far as they feel danger is not to near and they can act upon it. Once it comes too close, both physically and psychologically, once it passes the limit of despair and emotional total loss, my impression is, one cannot take it anymore, and the only way coping is ignoring the event.

Even if I fully understand the flood of emotional tweets and messages coming in, I sincerely hope, it won’t paralyze the supportive mass in the world around them…

I send them hope and courage. They have my support, whatever their origin is. A peaceful life should be accessible to all. And yes, deep down, I know, it might be naïve, I know it’s a utopic thought, but at this time of year, where people all over the world celebrate renewal, I would like to hold on to a dream…

I wish it were different, I send you my love, whoever you are, please, hold on to your hope.

Oops, you forgot something.